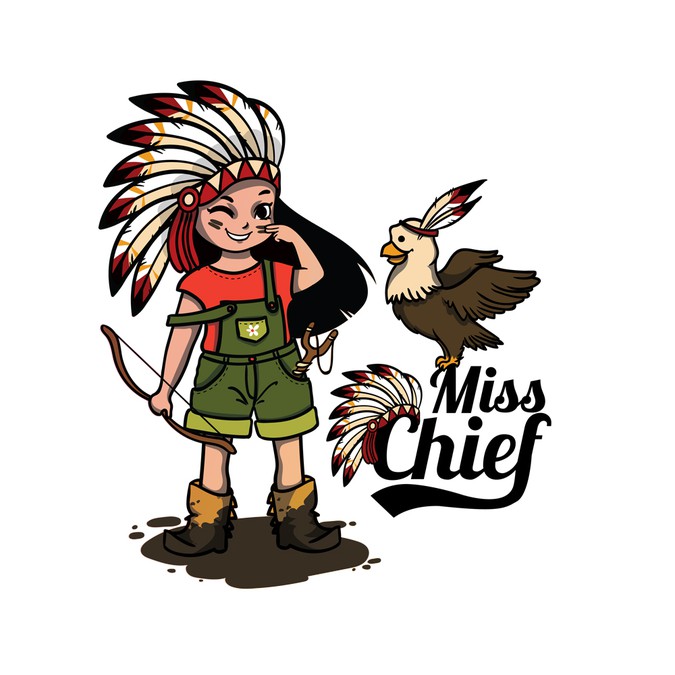 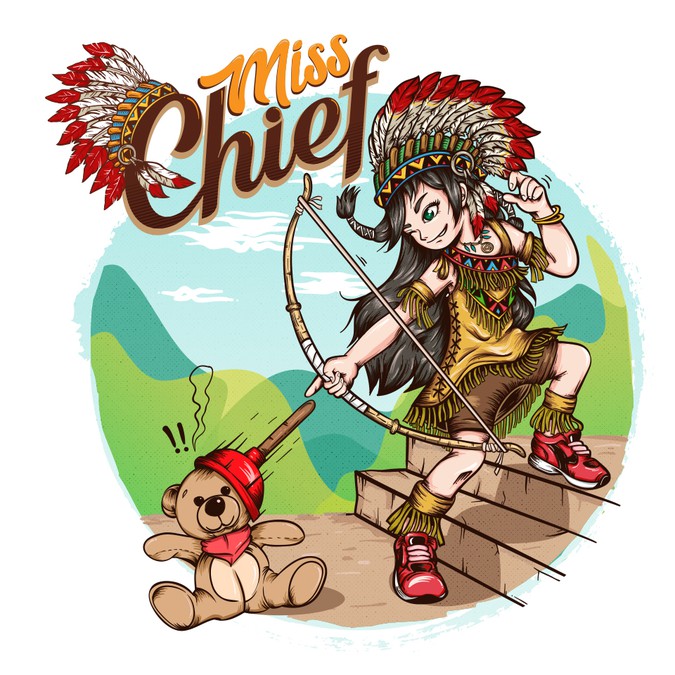 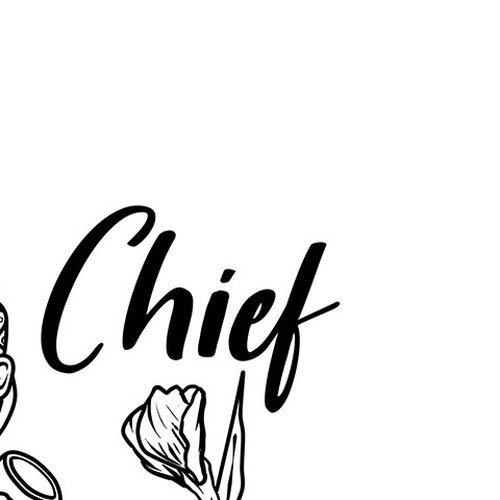 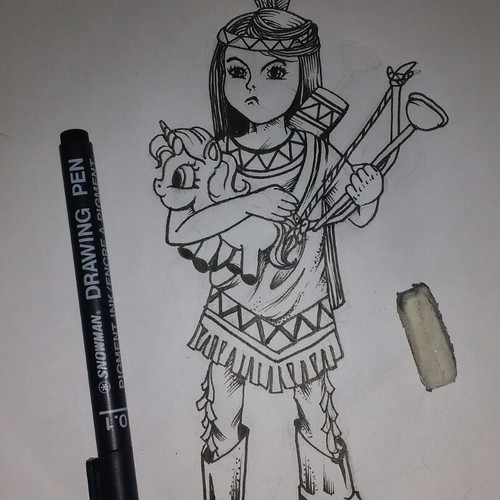 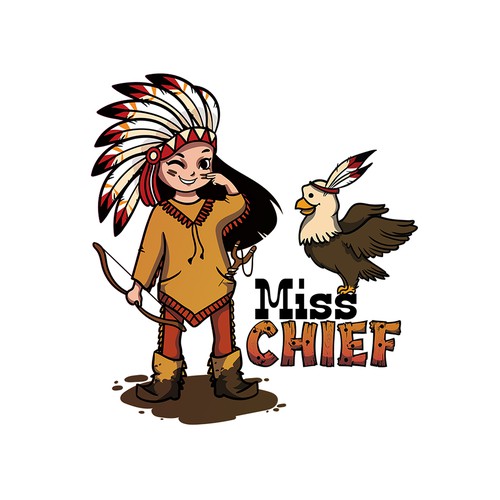 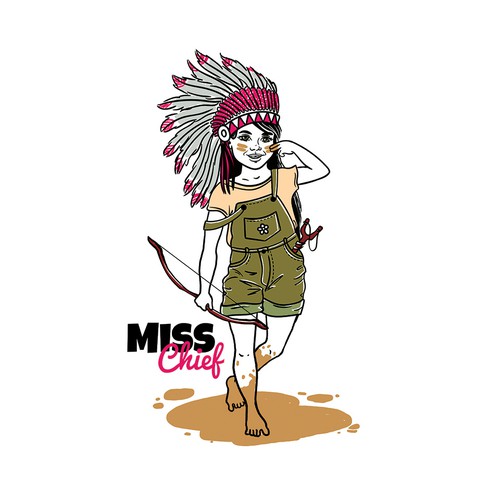 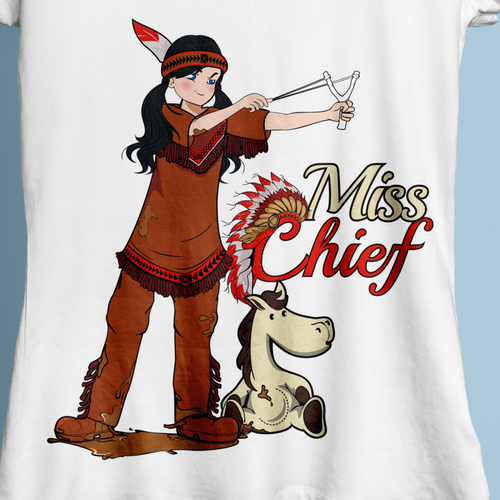 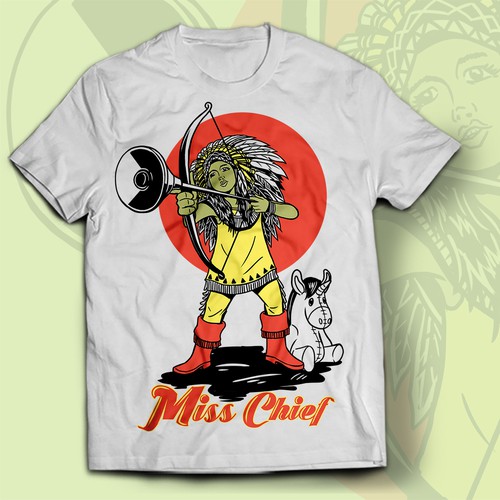 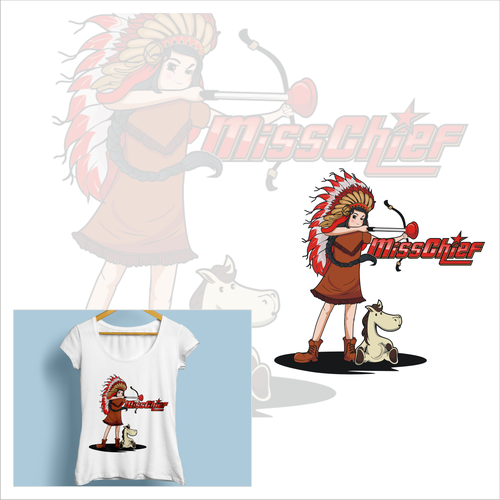 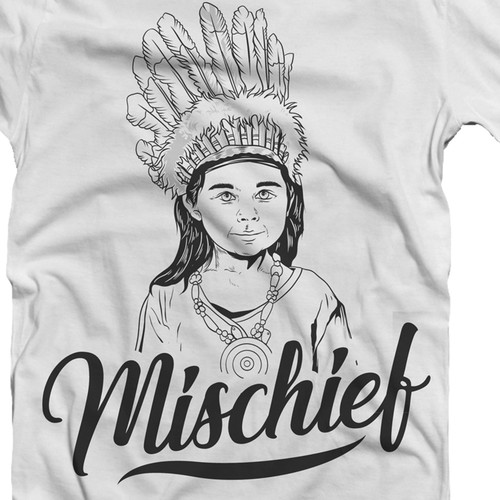 The idea is to create a line of T-shirt designs for you girls (ages 3-15) who don't adhere to the traditional stereotypical role patterns that are typically laid out for girls. I want to give them the tools to show that girls can also stand up for themselves and that they can also be playful, adventurous, devious and also full of mischief. For Game of Thrones fans: I want this brand to appeal to girls like Arya, rather than girls like Sansa. Hunger Games fans, think Katniss.

The brand name will be "MissChief", as a verbal hint towards what the T-shirts represent, but it is also an nudge to the main "character" of the brand, Anna. Anna is to be the main protagonist in all designs. She is a young girl, about 7 years of age (more or less) with long black hair who is always out to cause mischief and do things she really shouldn't. She must be portrayed wearing a native American chief's costume, hence the name of the brand. This costume must consist of a traditional native American headdress with feathers, long traditional (leather-looking) trousers and boots and a shirt without sleeves (or very short sleeves), all of which without too many decorations. In my head, I would like to see her with a chief's headdress, though I am somewhat worried that you won't be able to tell she is a girl. This is obviously far more important than what kind of headdress she is wearing.

The design must be a cartoon, semi-realistic, set in modern time, portraying Anna while doing something she really shouldn't. There are no restrictions on what this is exactly, but keep the target audience in mind. Ideally, this would involve bow and arrows with suction cups in some way, or some other tools and/or toys like a stuffed horse or bison. Use your imagination. It doesn't have to be super realistic, the emphasis is more on humor. The idea is to make the girls/the parents laugh and think "Oh yeah, that definitely looks like something I/my daughter would do".

With regards to the logo on the shirt: it should definitely match with the theme of the design. Since I'm going with "native American", that means that modern fonts are to be avoided. I'm also not looking for something typically western, but more handwriting-calligraphy. However, it should still be simple, without too many loops and whirls, if that makes any sense. In my head, I can see the words "Miss" and "Chief" split up below each other, with a slight indent for the word "Chief". I also think it would be cool if the "C" in "Chief" would be "wearing" the same type of headdress as Anna does. However, I am very much open to suggestions in this regard

- Anna in context (see previous)
- full body
- must be doing something active (e.g. roasting marshmallows, shooting a bow,...)
- name of the brand ("MissChief")